I have not blogged about the recent Russian adoption tragedy because I just couldn't wrap my mind around it. I mean, as a mother, I just cannot imagine placing my child (because little Artyom was this mother's child)on an airplane all alone for a long and grueling international flight back to the country that had not helped him in the first place, never to return, left to wonder where his mother and grandmother were and if they were coming back for him! Sickening!

I have not blogged about it because I had really just begun to sort out how I felt about adoption disruptions and then this happened!!

I know that when Chris and I found Lizzie, we both agreed that no matter what we found when we got to China, no matter what might be "wrong" with Lizzie that we had not been told about, she was our daughter. It was just that simple. We had made a commitment to her and to God and to our other children and we were bringing her home.

Now, that being said, I have read enough to know that if a family brings a child home and just cannot handle the extreme (and I mean extreme) or dangerous behavior their child is exhibiting, then many times disrupting (once home) is the best choice for the child. My heart sinks, however, when I hear of a family deciding "in country" to disrupt and leave that child behind. Many times these kids are in total shock and who wouldn't be?? Can you imagine leaving everything that has been familiar, all your friends and the people you had considered family, to go to a different country with total strangers?? I think I would absolutely shut down and I believe a lot of these kids do. Sometimes these families even ask to be given another child! Excuse me??? For 9 long months, our family talked about Lizzie, prayed for Lizzie, prepared for LIZZIE. She was our daughter, no matter what!

One day, right around the time I had heard about another disruption in China, I found a very special blog and I am so glad I did. Adeye and her family adopted a beautiful little girl from China who had been left behind by another family. Adeye had been "warned" not to adopt this precious child but they stepped out in faith and listened to their hearts and brought their daughter home. It is a truly inspiring story and one that makes your heart weep for all those who were left behind for perceived "problems" when all they needed was the love and nurturing of a family. Go to Adeye's blog, No Greater Joy Mom and read about this remarkable family and their precious daughter, Haven and while you are there, read about their 2 new precious daughter's, Hailee and Haden, who are waiting for them in a Russian Orphanage. This is another amazing story - trust me!!

As we waited for Lizzie, we did talk about what we would do if she came home and was violent toward us or her siblings or our pets. We talked about and disagreed a bit about different scenarios and how we would handle them, but the one thing we both agreed on was that we were committed to this child and we would do whatever it took to make it work. Again, I know that there are many really wonderful families who never thought they would disrupt but find themselves in a situation that they felt they had no choice and I am not condemning them for their heartbreaking decision. However, the way little Artyom's mother handled their situation was just plain wrong on so very many levels.

I was reading a blog post the other day about this situation. Kris over at Tell Her This had put a link to a post that she had found on a blog called West Wind . In this post, a mom of a little one from China talks about the Russian situation and in this post she talks about how her thoughts turned to Artyom and how he must have felt on that very long flight back to Russia. As her thoughts were filled with sadness for this boy, she was reminded of a plane trip she had taken with her daughter about a year after they had brought her home. On this plane ride, their beautiful little girl began to get very nervous and wanted to go home. As her anxiety level quickly increased, her daddy, very wisely, told her not to worry, that momma and baba would be with her no matter where they went and that they were not going away from her. After that little bit of reassurance, she calmed down and went to sleep.

This post was very significant to me because it took me right back to when we brought Lizzie home. She had been sleeping fairly well in China (in the room with us), but as soon as we got home, her nights became terrible. She would scream and cry and did not want me to leave the room but still seemed terrified to close her eyes to sleep. After a few weeks of this bedtime hell, I called our social worker, Lauren, from our wonderful agency and explained to her what had been going on and that we just didn't know what to do. Lauren listened and very simply suggested that Lizzie might be scared to close her eyes and sleep because we might not be there when she woke up. It did make sense. When Lizzie went to bed at her CWI, the nanny that put her to bed would be gone and another nanny would be there when she woke up. However, Lizzie was just 2 years old and pretty much non-verbal. Would she really understand what we were talking about?? We really should have known better!! "grin"

That night as we were getting the girls ready for bed, we talked about the next day and what we would be doing and where we would be going. OK, so far so good. As I lifted Lizzie up to put her in the crib, I held her close and whispered in her ear that mommie loved her and that I would be here in the morning when she woke up I told her that I would always be here and that I would never leave her. To our complete amazement, Lizzie allowed me to put her in the crib without so much as a whimper. She went to sleep and slept through the night and has never had a problem since. I take that back, the only problem now is getting her to WAKE UP!! Hehe!! It broke my heart to think that all this time, she was honestly afraid that we would not be there when she woke up. It also jolted me back to her reality and to just what this precious little one had been through. Sometimes I need those jolts because sometimes I forget.

Lizzie is a happy, loved and loving little girl who still has not been in our house as long as she was in her orphanage. How's that for a jolt and sometimes when she is acting out or tantrumming, I try to remind myself of this and of how very far she has come in (almost) 2 short years. She has done so well that it can be so very hard to remember, but I need to for Lizzie's sake.

I know that not every adjustment problem can be fixed through simple explanations or the best mommie and daddy in the world or even with all the love in the world, however, many can be! Artyom had only been home for 6 months - 6 months! It could have been that with tons of love and counseling, he might have developed into a wonderful, loving little boy - or not - but 6 months is not long enough to make that kind of drastic decision.

So, while I think disruptions in some cases are an ultimately necessary thing, disruptions "in country" or even after 6 months of being home are (in my opinion) premature, unfair and so very tragic.

I think about how far my sweet girl has come since we have been home and the progress she made even after being with us for a week in China, 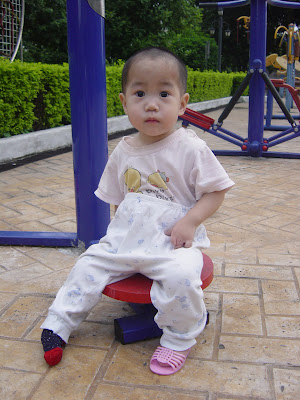 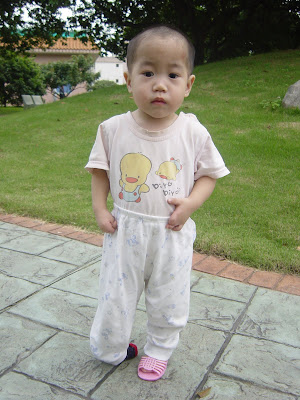 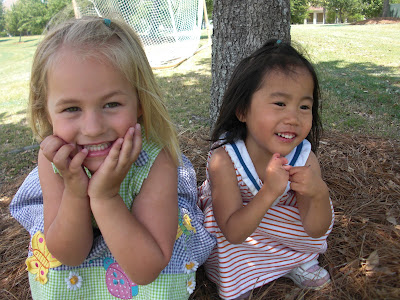 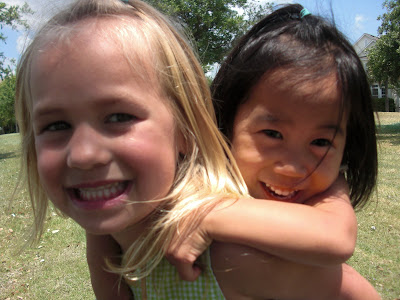 and it breaks my heart to think about how many wonderful, loving kiddos have been left behind because they were simply adjusting or coping the best way they knew how.

Is education the key? I don't know. More support after coming home? Maybe??? I don't know. I do know, however, that there are so very many kids who get adopted ALL the time, who are loved and cherished and flourish. Unfortunately, you don't hear about those adoptions very often. Sigh!!