Sunday Snapshot - The story of my God given girls

About a month ago I was reading a post written by an adoptive mom who believes that God does not play a role of any kind in adoption.  She did not feel that God had had a hand in their child's adoption at all on any level.

I read it.  I disagree with it but I read it and it got me thinking once again about God and how much I feel that having my girls (not just any girls, but Em and Lizzie) was all a part of His plan and how I almost screwed it all up!

I have not shared the story of how we came to have our girls, partly because it is a story that involves a surprise pregnancy and I know that many adoptive parents, some of whom may read my blog, have struggled with infertility and I do NOT want to hurt anyone who has struggled with that kind of heartache.

However, when I read that post, that particular post, I felt like I just had to share, because the story of my girls was what started me on the path of reexamining my faith, of figuring out just how I got to where I am (crazy most days but incredibly blessed) and where I my life is supposed to go.

First though, I have to start at the beginning.

My brother was born with hands and feet very similar to my Lizzie's.  He has no fingers on his right hand and his left hand looks so much like both of Lizzie's hands.  He also has no toes on either foot, which at times was harder for him than his hands.  I can remember other kids and their comments and their stares and I can so vividly remember how desperately I wanted to protect him from it all but as a child, feeling so desperately helpless and inadequate in my big sister defense.  I think it was then that the seed was planted, although I was not to recognize it until so much later in my life.

Fast way forward to my first pregnancy with our first son.  It was then that the subject of adoption first came up for hubby and me.  We talked about it as something that we wanted to do in the future, but during that first pregnancy, I began to get glimpses of that seed that had been planted so long ago.

Three beautiful boys later, the talk of adoption got more and more serious.  We had three wonderful little boys, wanted a little girl and wanted to adopt!  Perfect!

We selected an agency, selected a country and began our homestudy.

But the country was not China, it was Korea.

It was great, you could choose to have your baby escorted to the United States and we would only have to make one short domestic flight, only I had doubts...

Not the kind of doubts that make you go, "Whoa, wait a cotton picking minute here,"

But the kind of doubt that festers, that allows you to continue on your chosen path but just whispers to you in the quiet.

Looking back, I know who was whispering to me but I still was not listening.

We forged ahead, even as I thought about and discussed with hubby the fact that in China, there are girls who are abandoned all the time for just being girls, but gracious goodness do you know how long that flight is???  Side note:  I now know how many boys are abandoned as well, but I was a China adoption dummy back then.

I can even remember one conversation about how we both wondered what a bio daughter of ours would look like, curly dark hair and brown eyes was the conclusion - yeah right!!!

But we continued to forge ahead, so much so that just a couple of months after submitting our paperwork, we received a referral!  We were shocked and elated and in love.

Sung Hei was a very cute, non special needs, as young as possible Korean little girl with a ton of hair that stood straight up from her head!  We shared our joy with the world and just as we were beginning to choose a name for our new daughter, we got the surprise of our lives and our whole world got turned upside down.

One of those plans was that Sung Hei was not to be our daughter.  When Korea finally said that we could not proceed with the adoption, I was heartbroken.  The only thing that comforted me then was something that my very wise and very compassionate hubby told me.  He said that Sung Hei was never meant to be ours, that she was destined to be with another family, a family who perhaps was not quite ready and we just had to hold onto her for a little while and keep her safe while her true family got ready.  Boy do I love my husband!!!

God's other plan for us, His beautiful, wonderful, miraculous plan for us was... 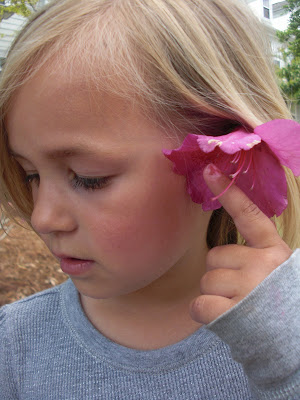 I cannot imagine my life without this girl.  She is the sunshine in my day (most of the time - heh). 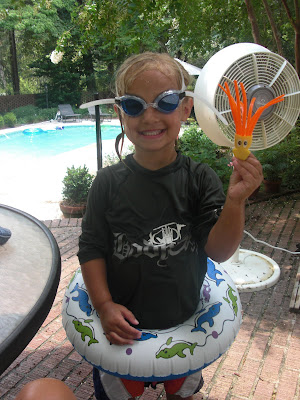 She is my boy bathing suit (and underwear - usually batman or diego) wearing... 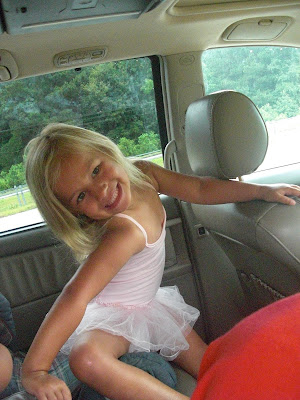 Ballerina and we are eternally grateful for the gift of her amazing spirit!!  She makes us laugh every single day and that is a gift!

His other plan for us was still in the works and He began to whisper to me again.

This time I began to listen, slowly at first but I did begin to listen.

When Em was about 1 year old, I began to research China a bit more and then I began to research special need children but I was still not letting myself really listen and we somehow ended up in a Vietnam Adoption program but again, I had doubts, serious doubts this time.  These were the kind of doubts that did make you go, "Whoa!  Stop the train! I wanna get off"  It was right around that time that the Vietnam program was coming under heavy fire and many ethical violations were discovered and we both began to question our decision.

Just as all of this was plaguing our hearts, the whispers became louder and His voice became clearer and my focus turned to China and to China's waiting children.  I kept this to myself for a while because I just needed to, and then I began to test the waters with Hubby.  China, he was good with (he actually likes to fly - crazy I know), but special needs he was not sure about at all.  Even though he admires my brother tremendously, he was scared.  Scared, I think, about what it would do to his heart!

But the whispers didn't stop and I kept researching and eventually looking.  I began to start to figure out how the whole China thing worked and began to find agencies with waiting child lists and began to ask for passwords - and - I - looked!

One day, I was reading over some emails when I noticed one from an agency that I had not heard of before.  That agency was Lifeline and they had a waiting child list.  For some reason, I looked and what I saw took my breath away.

As I scrolled down the faces of all the precious children on their list, I saw her face, 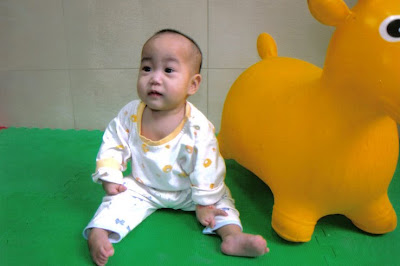 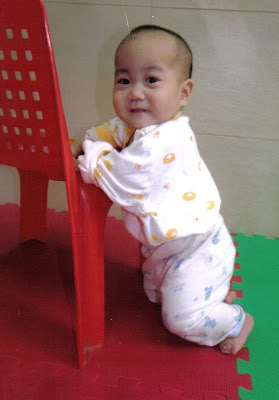 The face that I had been searching for, 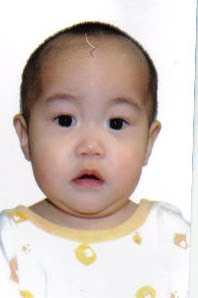 The face of my daughter, my beautiful daughter.

But there was a problem.  By her beautiful face were 2 little words, 2 little heartbreaking (for me) words,

As I sat there and stared at her face, something inside me told me to inquire anyway.

With trembling hands, I emailed Lifeline and inquired and asked that if the family who had her "on hold" changed their minds, to please let me know and then I waited.

I waited all of about 5 minutes and received my answer, the answer I had been searching for, for I believe most of my life.

The family who had her "on hold" had taken her "off hold" right before Lifeline received my email.

Now the whisper was loud and clear.

I asked Karla at Lifeline to send me her file and she did.

As I was looking again at Lizzie's beautiful face, I looked at the picture of her beautiful hands 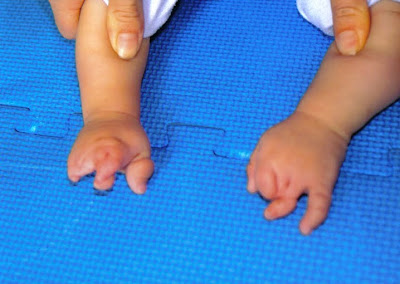 and they were the hands of my daughter, the beautiful wonderful precious hands of my daughter.  They were familiar and I at that moment I understood.  I understood so many things in my life and I had answers to all the why's that had so far been unanswered.  I knew the path before me and I knew what I had to do - convince hubby.

I emailed Lizzie's file and pictures to hubby and waited,

Again, I did not have to wait long because...

Is God in adoption?

I believe He is.

How could I not?

Every time my brother suffered, He nudged me and prepared me and began to whisper.  I do not believe that my brother was born to bring Lizzie into our lives but I do believe God used my brother to shape my heart.

I do not believe that Lizzie was abandoned to be my daughter but adandoned due to the very unfortunate circumstances in China and that God then brought her to us and that everything in my life up that moment helped me to recognize her face and her hands and helped me to bring my daughter home.

Thank you God for allowing me to hear you and helping me to finally listen.  I am still listening and am amazed at the path that has been laid out for me.  If you had told me even 13 years ago that I would be the mother of 5 kids and would travel to China with my 10 year old, my 8 year old (while leaving my preciuos 5 year old at home) and my 2 year old to bring home our other 2 year old, I would have told you that you were insane - and we nearly were (insane that is) by the time we got home - geesh!!!!

God was with me throughout Lizzie's adoption and the interminable wait and continues to be with me and all of my children and their wonderful Daddy and I pray that I will continue to listen and to truly hear what He tells me.  I can only imagine the blessings that will come, knowing the blessings that have already come!

To join in on Sunday Snapshots or to just read more (if ya can after this book of a post), go here: