A couple of nights ago, there was a big, huge, what do I do now kind of OOPS at our house! Our wonderfully happy, carefree, exuberant and just plain LOUD 9 year old was playing WEE in the playroom. In my blissful ignorance (which is where I try to stay most of the time!!), I was cooking supper and ever so sweetly calling (hollering) for said 9 year old to come down for dinner. I think my exact words were something like, "Turn off that thing and get down here this instant or you will never, ever play WEE again!!" But, of course, spoken (hollered) in my sweetest Mommie voice, complete with a southern drawl and everything, ya'll!! As soon as my precious child came into the kitchen, my Mommie radar started beeping and I knew sumpin' was up!! The loudest of my children (although Lizzie is giving him a run for his money on that one) was suddenly and inexplicably, the quietest!! Oh yeah, something was not right in Charlie land! Now you have to know that at dinner time, I am bombarded with 5 different voices wanting 10 different things ALL at the same time, so I ignored my radar. However, before dinner was done, the cause of the blip on my radar came to me and asked to speak with me - privately - upstairs - in his room no less!!!!! BEEP BEEP BEEP BEEP!!!!!! As soon as I got the rest of the gang settled, I headed upstairs. I had no idea what to expect, except that it MUST be BAD!! As I walked into his room, I could see that he was crying. Now this kid cried for the first 5 years of his life (constantly) but the day he turned 5 glorious years of age, the tears stopped and he became my happy child!! It was honestly as if on that date 4 years ago, the clouds parted and the sun came out for our sweet Charlie!! I really think that he was just, finally old enough to give his older brother as good as he would get:) Hehe!! Anyway, since then he has been the one who makes everybody else feel good with his crazy, happy go lucky and just plain funny ways!! So this was unusual. Turns out our happy go lucky kid got mad at the game he was playing on the WEE because he couldn't defeat a certain character (have I mentioned that I am not crazy about video games) and in his anger, decided to chunk the remote. Have you ever heard the phrase, "doesn't know his own strength" or "shoot first, ask questions later?" Well, not only did he throw the remote (bad, bad) but the remote decided to land in the big screen TV (bad, bad, bad, bad, bad)!!!! It left quite a mark on the TV and on Charlie. He felt soooooooo terrible and did have to courage to fess up, which saved his childhood gaming career because if we had discovered this before he told us about it..... I think my hubby (who likes video games) would have banned Charlie from the WEE forever or at least until he moved out and I think, even then, hubby would have found a way to ban him forever!! Hehe!! It ended up being a great teaching moment for all the kiddos. We sat everybody down and discussed the importance of, (1) controlling your anger, (2) taking responsibility for your mistakes, (3) learning from them and (4) having better aim!!!!! Poor Charlie is now off video games for a month and is the designated cleaner upper for the playroom, a fate, for Charlie, worse than oh I don't know - not being able to defeat a certain character on a WEE game!! Hopefully, lesson learned, at least until next month!!! 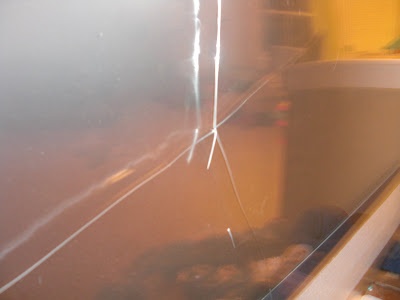